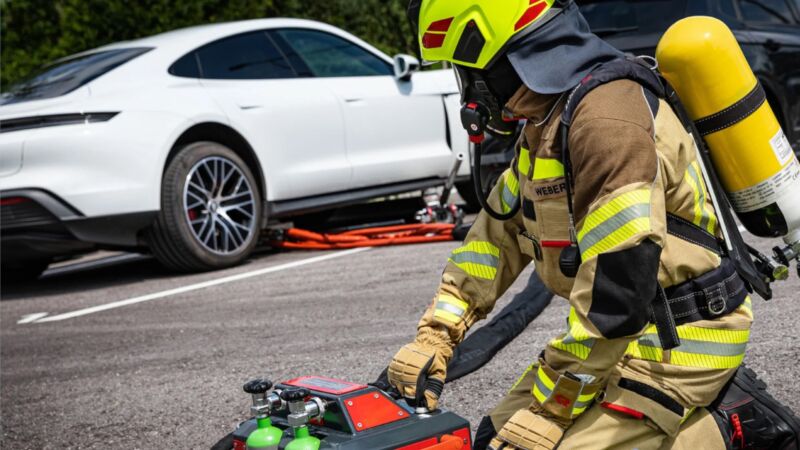 Firefighters needed four hours to douse the flames, in part because the battery kept reigniting. When the blaze was finally over, about 30,000 gallons of water had been poured on it—what the department normally uses in a month.

Electric vehicle fires aren’t common, but they’re different enough from fossil-fuel-vehicle fires that firefighters need new approaches. One firm in Europe has developed a shipping container-like box in which a blazing EV can be deposited and blasted with water from all sides. But it requires a dedicated truck, making it a costly addition for a fire department.

Next year, though, firefighters will have another option—a high-pressure nozzle that can be shoved underneath a burning vehicle to deliver water directly into the battery. Rosenbauer, an Austrian company that makes firetrucks and other equipment, says it has successfully tested the devices on a variety of battery designs, including pouch, prismatic, and cylindrical cells.

Most EVs house their batteries flat and low in the chassis, which allows for spacious interiors and a low center of gravity that benefits handling. But when a fire breaks out, there’s a lot more car between the battery and any water sprayed on top, which is the traditional technique.

The new device allows firefighters responding to battery fires to use water more efficiently and hopefully extinguish the fire faster. First, firefighters make sure nothing else is burning on the car (seats, tires, etc.). Then they slide the device under the battery before retreating about 25 feet to a control box. Finally, they activate a “piercing nozzle” which punches into the battery pack to deliver water directly to the cells.

In a preview of the technology last year, Rosenbauer said that only around 260–1,000 gallons (1,000–4,000 liters) of water are needed to bring a flaming battery pack down to a safe temperature. That’s around two orders of magnitude less than it took Texas firefighters to put out the Model S in April.

If a vehicle is on its side or roof, or if there isn’t enough clearance under the vehicle, firefighters can place the device inside the car or on the exposed undercarriage—whatever will give them safe access to the battery. The nozzle can also be left attached to the vehicle as it’s being towed away so firefighters have quick access should the battery reignite.