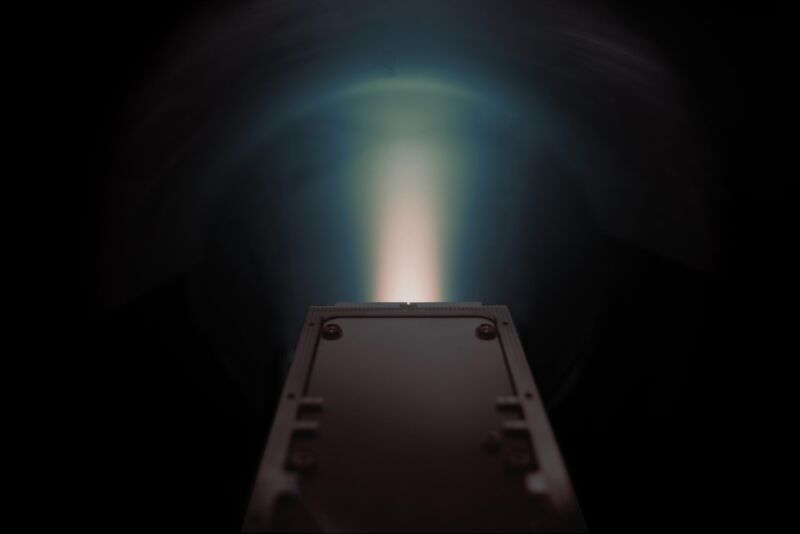 Most people are probably familiar with iodine through its role as a disinfectant. But if you stayed awake through high school chemistry, then you may have seen a demonstration where powdered iodine was heated. Because its melting and boiling points are very close together at atmospheric pressures, iodine will readily form a purple gas when heated. At lower pressures, it’ll go directly from solid to gas, a process called sublimation.

That, as it turns out, could make it the perfect fuel for a form of highly efficient spacecraft propulsion hardware called ion thrusters. While it has been considered a promising candidate for a while, a commercial company called ThrustMe is now reporting that it has demonstrated an iodine-powered ion thruster in space for the first time.

Rockets rely on chemical reactions to expel a large mass of material as quickly as possible, allowing them to generate enough thrust to lift something into space. But that isn’t the most efficient way to generate thrust—we end up trading efficiency in order to get the rapid expulsion needed to overcome gravity. Once in space, that need for speed goes away; we can use more efficient means of expelling material, since a slower rate of acceleration is acceptable for shifting things between different orbits.

The current efficiency champion is the ion thruster, which has now been used on a number of spacecraft. It works by using electricity (typically generated by solar panels) to strip an electron off a neutral atom, creating an ion. An electrified grid then uses electromagnetic interactions to expel these from the spacecraft at high speed, creating thrust. The ions end up being expelled at speeds that can be an order of magnitude higher than a chemical propellant can produce.Advertisement

Only a relatively small amount of material can be accelerated at once, so this can’t generate anything close to the amount of thrust produced in a short period of time by a chemical rocket. But it uses far less material to produce the same amount of thrust and, given enough time, can easily produce an equivalent acceleration. Put differently, if you can be patient about your acceleration, an ion engine can do the equivalent amount in a form that uses less mass and less space. And those are two very important considerations in spacecraft.

Critical to making this work on a spacecraft’s energy budget is a material that can be ionized without requiring much energy. Right now, the material of choice is xenon, a gas that’s easy to ionize and resides several rows down the periodic table, meaning that each of its ions is relatively heavy. But xenon has its downsides. It’s relatively rare (it’s only one part per 10 million in our atmosphere) and must be stored in high-pressure containers, which cancel out some of the weight savings.

Iodine seems like an ideal alternative. It’s right next to xenon on the periodic table and normally exists as a molecule composed of two iodine atoms, so it has the potential to produce more thrust per item expelled. It’s even easier to ionize than xenon, taking 10 percent less energy to lose an electron. And, unlike xenon, it happily exists as a solid under relevant conditions, making storage far simpler. Just a bit of heating will convert it to the gas needed for the ion engine to work.

The big downside is that it’s corrosive, which forced ThrustMe to use ceramics for most of the material that it would come into contact with.

The thruster design included a fuel reservoir filled with solid iodine that could be heated with resistance heaters powered by solar panels. The iodine itself was inside a porous aluminum oxide material that kept it from fragmenting from the vibrations it experienced during launch (the aluminum oxide is 95 percent open space, so it didn’t subtract much fuel storage). The tank is connected to an ionization chamber via a small tube; when the system was cooled after use, enough iodine would solidify in this tube to seal off the fuel from the outside world.