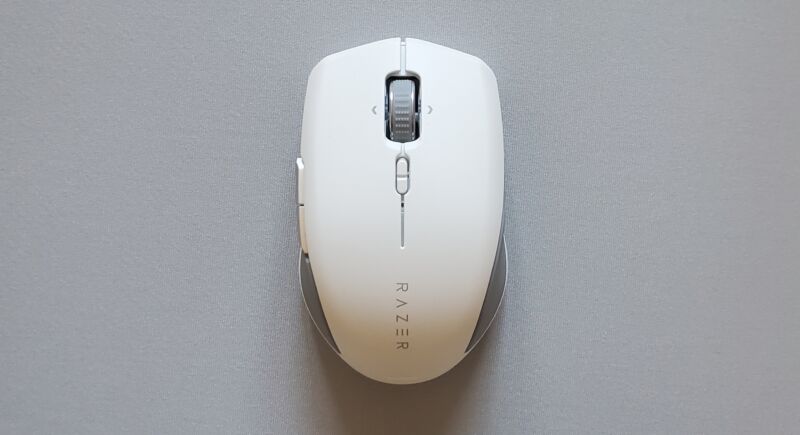 A mouse is an obvious candidate for cord-cutting. Going wireless ensures that you don’t get tangled up in your cord or have to deal with cable drag, and wireless connections have become so reliable that even gaming companies are offering wireless mice with no real lag issues.

The situation is a bit more complicated for people using multiple devices. Bluetooth connections may be stable, but that doesn’t mean I want to pair and re-pair my mouse repeatedly. Sometimes, being able to just plug in a mouse seems easier.

But there’s another way. The Razer Pro Click Mini joins a selection of wireless mice that let you pair with three Bluetooth devices and pick which machine you’re controlling with the press of a button. You can add yet another PC to the mix by using its included wireless dongle, for a total of four connected devices.

The $80 Pro Click Mini is a more portable, cuter version of the original Razer Pro Click, which costs $20 more. The new mouse has a longer battery life and is highly programmable, from its five-way wheel that can manage two different scrolling styles to its ability to store macros. But rivals with similar feature sets offer even longer battery life, a quieter scroll wheel, and even an easier way to toggle across your connected devices. Does Razer’s new mouse do enough to keep up?

But it’s not so easy to toggle across Bluetooth devices with the Pro Click Mini. You switch machines by pressing the same button that you long-press to start Bluetooth pairing. But unlike with the MX Anywhere 3, MS7421W, and Spectre 700 mice, there’s no image on the mouse itself to let you know what you’re currently connected to. Instead, you have to memorize a color code. A light on the mouse’s underside turns blue when connected to PC 1, for example, green for PC 2, and greenish-yellow for PC 3. It’s a tiny light, and two of the colors are pretty similar, so the system isn’t exactly intuitive.

Moving to the device with the dongle is much easier. You just toggle a switch on the mouse’s underside from Bluetooth to 2.4 GHz mode. The dongle connection is supposed to be more reliable and induce less lag than the Pro Click Mini’s Bluetooth option. Both worked well for me, even alongside a Bluetooth keyboard.

Razer’s gaming heritage means it isn’t afraid to get into more extreme specs. Even though the Pro Click Mini is a productivity mouse, it uses a sensor found in some of Razer’s gaming mice, including the newer Razer DeathAdder V2 X HyperSpeed and the MMO-focused Razer Naga X. Razer toned down the Razer 5G sensor’s capabilities in the Pro Click Mini, however, as you don’t need the highest counts per inch (CPI) or max velocity when you’re working on office tasks.

You can store five CPI settings in Synapse. But there’s no default button for CPI toggling like you’ll find in some gaming mice. You’ll either have to program a button to change CPI stages or do it manually in Synapse.